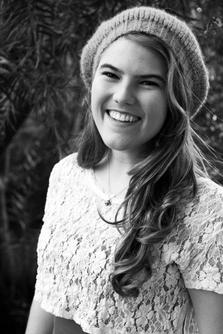 Danielle Bordelon is a fiction writer currently focusing on short stories and the editing of her novel. She lives in a Dallas apartment with three friends, hundreds of abused books, and an overactive imagination. Her published work is available on daniellebordelon.com

Danielle Bordelon is a fiction writer currently focusing on short stories and the editing of her novel. She lives in a Dallas apartment with three friends, hundreds of abused books, and an overactive imagination. Her published work is available on daniellebordelon.com 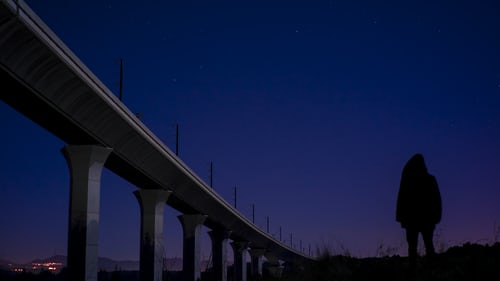 He stood perched on the ledge, the tips of his toes suspended hundreds of feet above the dark bay. The shadows that coalesced around him grew darker, hungrier with each minute.

Chris drummed his hands on the steering wheel in an unsteady rhythm as his car glided onto the bridge. He hated bridges—had since he was a kid. There was something unnatural about trusting a small strip of concrete to support him hundreds of feet in the air. He’d always had the somewhat irrational fear that the bridge would crack beneath him and send him plummeting towards the bay’s depths. But to go around would have added another hour to his commute, and at least it would be a quick drive at this late hour.
Chris saw him immediately, although others had zoomed past, unaware. Or unconcerned. He pulled over with an intake of breath, hands shaking.

“I—uh—there’s this guy on the bridge. He’s on the outside of the railing, just standing there, not even moving. I think—I think he’s going to jump.”

“Okay, thank you for your call. Where on the bridge are you located?”

“Okay. Go talk to him. Distract him if you can. Someone is being dispatched right now to deal with situation.”

Chris’s hands continued to shake. He felt as if he should be running to the man, but his feet felt heavy, as if he waded through thick mud. He clutched his stomach, trying to avoid spewing its contents onto the pavement.

The man on the ledge didn’t stir as he approached.

The man turned his head. Chris couldn’t make out a face beneath his hood.

Chris stopped a few feet from the railing, unsure how to proceed. He thought the man sounded young and vulnerable, like he desperately needed a friend.

“Hi, Chris. I’m sorry, but you can’t stop me. I’ve already made my decision.”

“Don’t do it. Please. I know it seems like the only way out, but I promise things will get better in time. I don’t—I don’t know what else to say. I’ve been in your place. I’ve wanted to end things.”

“Really? And what made you want to keep living?”

“Nothing, for a while, just too scared to actually, you know, take the plunge. But then, day-by-day, things started to look up. I’m married now, with two kids who I love more than I would have ever thought possible. I would’ve never experienced any of that if I’d given up. Just stick around. Please.”

“Your wife, your kids, what are their names?”

Only the railing separated Chris and the man. Gently, he set down his cell phone on the pavement.

“My wife’s name is Anna. We have two boys: Jake and Danny.”

The man tilted his head ever so slightly to look at Chris, but his eyes remained hidden.

Chris clambered over the railing and onto the ledge. His head swam as his feet hit the concrete. He felt as if his body had moved of its own accord, like in one of those nightmares he had had in high school. His knuckles turned red from the effort of clutching the railing. His round glasses began to fog up and slip down his sweaty nose.

The man shook his head beside him.

“Jump? Oh no, that was never my intention.”

The man removed his hood.

Chris tried to claw his way back over the railing. His legs wouldn’t move. His arms flopped by his side, useless and limp.

The man smiled with both pity and affection.

“Oh, Chris! You can’t stop me. I told you, I’ve already made my decision.”

Gently, he nudged Chris over the edge, watching calmly as he plummeted through the air towards the dark depths of the bay, mouth wide in a soundless scream.

He then climbed back over the railing, picked up Chris’ cell phone from the pavement, and waited. It didn’t take long for the police to arrive. He shook his head solemnly as the officers approached.

“I tried to stop him—he just—he wouldn’t listen. I can’t believe it.”

“You did a good thing, son, you tried your best. Don’t beat yourself up about it.”

He nodded grimly.
The younger officer stepped up to the railing, glancing curiously at the bay below as if somehow he could see the body in the dark water far below.

“We’ll need to file a report.”

The man looked up, smiled briefly, and pushed his round glasses further up on his face.