Frank, the Undead and the Cat 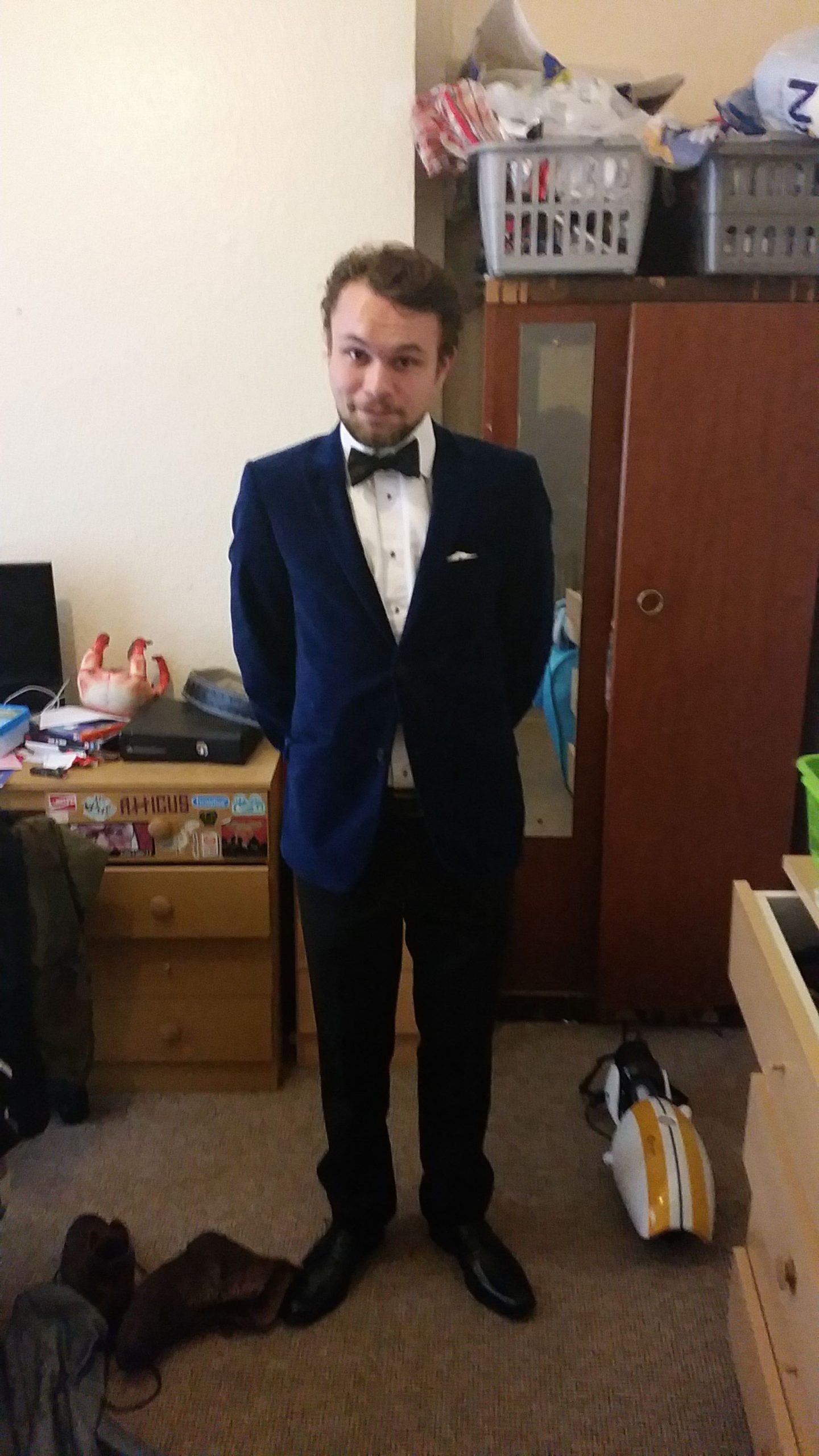 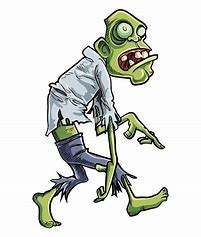 The dead should not walk.  This is a universally known and undisputed fact.  Frank, however, stood at his bedroom window, coffee in hand, watching the corpse of a rather foetid looking woman bang on his front door for the fourth time.  He took another slurp.  The woman banged again, but Frank knew the front door was well locked and barred; even if by some miracle she did manage to break down the door, Frank would have more than enough time to think of a plan while she munched on Mrs Prouse at 47A downstairs.  Frank liked to think of himself as eminently practical.  It should be said, that though Frank was not altogether evil, he was…socially oblivious.  His wife had died some two years ago and with her went his happiness and his tenuous connections to those around him.  He now lived by himself in the one bedroomed flat.  Although pragmatically continuing with life, his heart was not really in it.  When the dead did finally start to rise, people had screamed and ran, but Frank had just gone to the shops.  Soldiering on was what he was good at.

Another bang punctured the air.  Frank’s face sagged further into its habitual frown. This is why he hated things like the apocalypse.  Like most elderly people, he had a routine, and this particular zombie had rudely started trying to break into his house five minutes before his alarm usually went off.  This had propelled him into wakefulness in a foul mood.  The rest of the day would probably be ruined now.  Frank happily drifted into thinking just how spoilt his day would be when his eye caught another movement out in his garden.  Slowly but surely, stalking its way through the grass, with its tail cutting through the air like the tip of a shark, came a small black cat.  Frank choked on his coffee.  Damned, bloody things!  Of all the creatures that had to survive it had to be cats!  Dogs had been ripped to shreds by the undead, cows became four hundred pounds of black and white rabid terror and Frank had even read something about hamsters becoming deadly furballs back when the papers were still in print.  For some completely unknown reason though, cats did not interest the undead.  Thus, vile felines treated the apocalypse with the same aloof indifference that they had previously greeted normality.

Anger swirled within Frank as the cat centred itself in the garden and hunkered down in a squat.  As if to add insult to injury, Frank’s least favourite animal was now gently crapping on his immaculate front lawn.  Bugger the apocalypse.  Frank had kept that lawn pristine since he and his wife had moved in some thirty years ago.  Frank and Margery had lapped up the compliments the neighbours lavished upon them every time they passed by, and it had been a frequent talking point at parties.  Now, there were no more parties.  The only passersby were the undead (though Frank liked to think when they stopped outside and sniffed for fresh meat, they were actually admiring the scent of the marigolds).            Unfortunately, with a corpse trying to break in downstairs, there was no safe way of chasing the cat from the lawn.  He briefly considered his service revolver, before remembering he’d spent the last of the bullets on his shopping run last week.  He cursed quietly under his breath as he realised all he could really do was wait for both cat and corpse to finish their business and move along so he could go outside to clear up the mess.

The neighbours had often berated Frank about his attitude towards felines. Fortunately, Frank had no real reason to talk to his neighbours after his wife’s passing, and even less so now that they were dead too.  His wife hadn’t been that keen on cats herself.  It had been a point of solidarity between them.  She was one of the very few who understood what others considered to be his irrational hatred.  The truth was (or so Frank often said to her) that he had become a prisoner of war due to cats.  While serving with the “desert rats”, a cohort of soldiers stationed in Morocco, his company had evaded a series of increasingly large German patrols.  One night, while hiding from a patrol with a band of his men, a small grey tabby stalked up to the group.  Its incessant mewing causing the patrol to investigate the source of the noise.  Their subsequent arrest of the entire band made Frank realise that cats were no friend of man.  Three months in a sweltering iron cage with nothing to do but brew on the subject had not helped the matter, and when Frank had finally returned to England he swore two things.  Firstly, that he would never forgive cats.  Secondly, he would never go for a holiday in Morocco.

Frank vaguely remembered that in the first conversation he had ever had with his wife, she had mentioned that she did not fancy Morocco as a tourist destination.  He had taken it as a sign that they were meant to be together.  As he gulped another mouthful of his now lukewarm coffee, he allowed his mind to reflect on their happy time together.  He had married her after the war, they had tried to have children, moved into this house and finally…SMASH.  Frank started out of his daydream and his eyes darted to the garden below.   While the corpse had not yet managed to break down the door, one of its wildly flailing limbs had caught a nearby hanging basket and sent it flying across the garden.  This was now too much to take.  Frank had fought in a war!  He wouldn’t let his own home be ruined by corpses and cats!  His stubby fingers roused to action, he upended the last of the coffee onto the woman below, causing her to roar loudly.  Frank lurched across his bedroom; he grabbed his walking stick and booted the door open with a comfortably slippered foot.  His wild momentum carried him downstairs in record time, but the soldier in Frank caused him to halt at the downstairs landing and consider his options.  The corridor stretched before him.  The scratchings and moanings coming from 47A confirmed that Mrs Prouse was in fact now undead and therefore of no use to him whatsoever in his current crisis.  Typical.  She had been rude and unhelpful in life and now she didn’t even have the decency to be bait in death.  Frank was on his own.  But he would not back down.  He would avenge his hanging baskets. SMACK.  Another whack came from the door, almost beckoning Frank to the fray.  SMACK.  Frank resolutely marched forward, his fingers tightening on the walking stick.  SMACK.  Frank finally began to undo the four deadlocks that held the door firmly in place.  SMACK.  CLICK.  SMACK.  CLICK.  SMACK… CLICK.  Frank heaved the door inwards and propped it open with a brick he kept there for that sole purpose.  No sooner had he done so than the woman descended upon him.

The battle that ensued was far from graceful.  If the fight could have been seen as a dance, it would have been like two people in wheelchairs trying to do the can-can.  There were lots of “bloody hells” and “buggers” and whacking from Frank and just lots of roaring from the corpse.  The ‘woman’, if she could be so called, had fallen directly on top of him and now six broken and bloodied teeth gnashed dangerously close to Frank’s face.  Blood and saliva dribbled onto his chest.  Blast!  His favourite cardigan!  A swift bash to the side of the head was Frank’s response to the drooling, causing her to roll off him, and he somewhat quickly rose to his feet.  Frank kicked with as much might as his pacemaker would allow at the creature’s belly.  Another shrieking roar came from the corpse, but Frank was already turning to face his now approaching adversary as she too rose from the ground.  The woman charged at Frank again.  Both parties now grappled ineptly at one another, near-death slowing the one, undeath the other.  Frank managed to raise the length of his stick, and gave the undead a mighty sideways clobber to the ribs, causing both parties to become momentarily separated.  The undead fell back, off the path and into the flowerbed, causing a rotting foot to trample several prize Magnolias.  Those had been Margery’s favourite!  The woman and Frank froze and stared at each other for a fraction of a second.  Even the undead seemed to understand the significance of its last action.  The moment was shattered as Frank yelled a cry to raise the dead and all but threw himself at her.  The woman stumbled back as he charged at her, yet the pensioner gave her no respite, smacking away with all his might and yelling something about “back in his day!”  Suddenly, Frank saw a flashing movement from the ground.  The woman tripped on something.  She tumbled backwards and landed headfirst onto the path below with a wet smack, spraying crimson and black brains everywhere.
Frank panted and stared at the now truly dead corpse.  He heard a soft purring, and looked down to see none other than the crapping cat rubbing at his legs.  It had been the cat she had tripped on! The cat had won him the battle.  He himself had only provided the momentum necessary to commit the killing blow.  His temper flared briefly before he checked himself.  There had been enough fighting that day.  “I suppose I’m going to have to clean that up, aren’t I?” he grumbled. The cat merely looked back at him.  Frank heaved a sigh and mumbled,  “Thank you, damned cat.”

Still no response.  Frank tried a sort of bow to the creature and motioned to the front door.  After several seconds, the cat meowed and then trotted towards the open door with Frank in tow, grumbling that “now the damn thing understands me”.  The cat paused to scratch itself against the brick that propped the door open.  The brick was dislodged and, as the cat trotted over the threshold, the door slammed shut, triggering the automatic locking mechanism just as Frank reached the welcome mat.  He reached into his pocket for his keys.  The cat turned around and looked at Frank disinterestedly through the glass.  His pocket was empty.  Frank stared at the cat in disbelief.