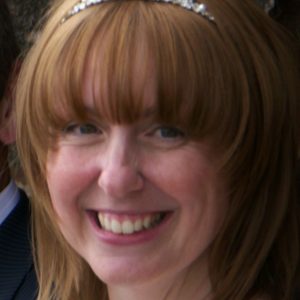 Born in Derbyshire, Caroline lives in Lincolnshire with her husband Steve, daughter Bethany and step-daughter Chrissy. She works in local government and in her limited spare time enjoys reading, writing and floristry, as well as being involved in her local church. She's a lousy cook and has no plans to improve.

Born in Derbyshire, Caroline lives in Lincolnshire with her husband Steve, daughter Bethany and step-daughter Chrissy. She works in local government and in her limited spare time enjoys reading, writing and floristry, as well as being involved in her local church. She's a lousy cook and has no plans to improve. 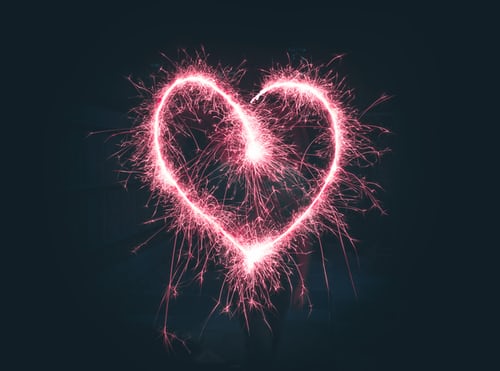 I think it might need some work, frankly. Maybe I’m being a little too modest. Or honest. Let’s face it, I’m so middle of the road I could paint white lines for a living.

I’m posting a photograph, along with the ‘blurb’. It isn’t the best picture of me, but then in the best picture of me I’m wearing a wedding dress and I’m told that can be a little off-putting for prospective dates. Makes you look too married, apparently, or a bit too keen. No, I’ve chosen my second-best picture, the one where I don’t look anything like me.        Unfortunately, I’m not terribly photogenic. At least I hope I’m not, as the alternative is I’m really quite ugly. If figure if I’m, say, a 5 out of 10 in the looks stakes (10 being Angelina Jolie, zero being the plainer one of the ugly sisters), this photograph is a 7. That might bag me a 7-rated man (or an ambitious 6 / down-sizing 8). Unless Mr Seven has gone through the same process as me and knows the game, in which case he might deduct a couple of points, realise I’m a 5 and pass me over for a 9 who might at least be a 7 in the flesh. Although if he’s done that it would suggest he wasn’t a 7 in the first place, and was probably a 5 himself (or maybe even a 4; men can be a bit more brazen in that respect).

I know it’s not all about the looks, I’m not that shallow. But there’s a reason why dating sites ask for a photograph and that’s to save the embarrassment of a 3 meeting up with a 9, which would just waste everyone’s time. Although it worked out for Rod Stewart. Several times.

Should I post the second-best picture and risk disappointing Mr Seven? I’ll just have to hope that if I get a date out of this we go somewhere dark, or better still he has a time machine and can meet me in 1985.

Having second thoughts, I take down three large, brightly coloured, if rather dusty, boxes of photographs from the loft. Four decades’ worth of photos spill out. There are plenty of other, more recent pictures saved on my laptop, but digital cameras became popular around the same time I became wrinkly, so I don’t feature in many of them. I flick through any number of yellow-toned 70s birthday parties, 80s graduations, 90s engagements and weddings, and what could be a hundred pictures of someone’s baby, or a single picture of a hundred babies – it’s hard to tell. There’s packet after packet of me and the Ex (a firm 8 who woke up one morning, did the maths and left), but it would be hard to extract a picture of just me from them; in every picture we’re as close together as two people can be, and I’m not sure I could separate us without being obvious. I’m not sure I want to, either.

One such picture shows us on a summer’s day, standing proudly in front of his first car, a Ford Fiesta in ‘champagne gold’, who we christened Freddie. I’m in a drop waist ra-ra dress (what was I thinking?) with a lady Diana haircut. He’s looking at me and laughing, probably at the dress, maybe the hairdo, it’s hard to tell. I have the expression of someone deeply in love who thinks things will always be this way, that there are an infinite number of sunny days ahead.

Deciding it wouldn’t be right to use a 28-year-old image, I delve deeper in to the box and find something I’d forced myself to forget a long time ago. In a deep blue velvet album are the ‘glam’ shots I paid an arm and a leg for, half a lifetime ago. Looking back, I can’t recall what inspired me to pay someone two week’s wages for what was an industrial-strength ‘make over’ and some serious back-combing. After wrapping me in what I think was gold curtain material and telling me to ‘smoulder’, they proceeded to take a number of pictures in which, on reflection, I look rather like Bonnie Tyler with a heavy cold. The sad thing is that I thought I needed an inch of make up to look good, and now I would give pretty much anything to look like the me I looked like after I’d wiped all the make up off at the end of that eye-wateringly expensive day.

I lose count of the number of snap shots of ‘the girls’ on various nights out. Some of them played the part of ‘the girls’ for a strictly limited period, others for longer. A number of those appearing in their cropped trousers and endless bangles as ‘the girls after ‘O’ levels’ had already disappeared by the snap of ‘the girls at college’ in their skin-tight jeans and low slung belts. Most were history by ‘the girls in Majorca’, and by ‘the girls at my hen do’ only one of the originals remained. She remains to this day, and played a role in ‘Engagement Party’, ‘Wedding Day!’ and ‘Aarrghh…40!!, in which I look, respectively, tipsy, bridal and half-crazed. I discount them all.

I return from my trip down memory lane with a warm feeling in my gut clutching the photo of me, the Ex and Freddie the Ford. I’m inspired.

“Classic eighties model, seen better days but still running well. Fun and reliable, despite being left to rust for some time. With a little care and attention could be like new. WLTM similar. Must have own furry dice. Sold as seen.”

I clip the photograph so it’s just me and Freddie the Ford, scan it and upload it on to the website with my ad, and wait.

I decide not to check my inbox for a few days, to avoid disappointment. Of course that goes out the window halfway through the second day, when I log on and instantly regret it. Nothing. To be frank I’m not particularly surprised. I’m not 20, I’m no supermodel and I have too much forehead for my face. The Ex helpfully pointed that out sometimes, mid-argument. He wasn’t wrong, of course, but still. Somewhat predictably when I last bumped into him, he was with his latest girlfriend, Naomi, who is 20-something and built like Kate Moss, with her cute nose, perfect hair and unfeasibly small forehead. But I’m not bitter.

Somewhat disheartened, I keep away from my email account until the following weekend, when I’m thrilled to discover three requests for dates and one offer on Freddie (“£200 final offer – can you deliver?”)

It is rather strange, assessing these men by a few words and a blurred image. This is the problem: like me they will have spent some time choosing just the right message and the picture they feel best reflects them, which may or may not be a fair resemblance. And even if it was, can I make a judgement on such a small amount of information? Well, now isn’t the time to question the whole process. I have suitors to review.

I consider Quantity Surveyor, 45, Caretaker, 51, and a 49 year old “pilot/racing driver” who is currently between pilot/racing jobs and is working at B&Q (“the superstore, not the smaller one”).

Quantity Surveyor seems nice enough, and I consider emailing back to found out more. Caretaker, however, makes me smile.

“Young at heart old banger WLTM the lady with the heart-shaped face and beautiful smile, for trip to the seaside (wear your flat shoes – I sometimes need a push) and possibly more. Very clean. OFD. Colin.”

It takes me a few minutes to work out that OFD means Own Furry Dice.

I have a strange feeling in my stomach, a feeling I haven’t had in a long time. I feel girlish, and hopeful, and a teensy bit sick. Studying his photograph, I’m thrilled to see a few wrinkles, what looks like grey hair and smiling eyes. This may come to something, or it might not, but I feel confident enough to type a reply.

“Seaside trip sounds lovely. As last pic was taken 28 years ago, please find a more recent pic (my second-best) attached. Will need to see furry dice before making final decision.”
Before I hit ‘send’, I hear the ping of an incoming message and instinctively go to my inbox. Another prospective dates awaits:

“Dear eighties model. A champagne gold Ford Fiesta, a sunny day and a beautiful girl. The man you cut out of that picture was a mad fool. Ever wish you could go back in time and do things differently? Good to see you, and Freddie, again. Maybe we could catch up over a drink?”

I sit and look at the message for a long time. I waited for so long for him to get back in touch, to regret what he did, to want me back. Have I read his message correctly? Is this it? I start to type, and after a number of false starts I reply.

“V surprised to hear from you. Didn’t expect to meet you on a dating site. Sorry things didn’t work out with Naomi. Hope you’re keeping well. Look forward to catching up.”

I don’t get the instant response I was hoping for. I sit and stare at the screen, punctuating my staring with a few games of Candy Crush. Finally, a response.

“How about the King’s Head on Friday night? Naomi’s still on the scene – what she doesn’t know won’t hurt!!”

My eyes sting a little, and I feel like a fighter who’s finally struggled up after a knockout blow, only to feel another fist in the face. I realise what a fool I’ve been, how long I’ve spent waiting for him to realise his mistake, to come back. I’m crying now, not because I can’t have him but because I’ve wasted so much time, always looking back, always believing my best days were behind me, always thinking I was worth less without him.

I delete his message and go back to the response I typed to Colin the Caretaker.

And I press Send.