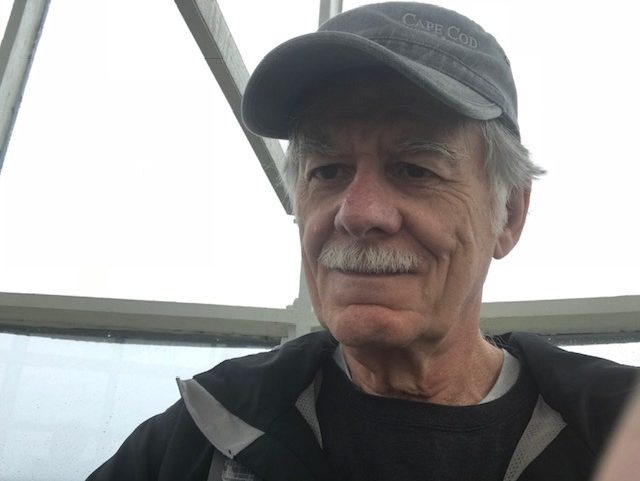 Gary Ives lives in the Ozarks with his wife and two big dogs where he grows apples and writes.

Gary Ives lives in the Ozarks with his wife and two big dogs where he grows apples and writes. 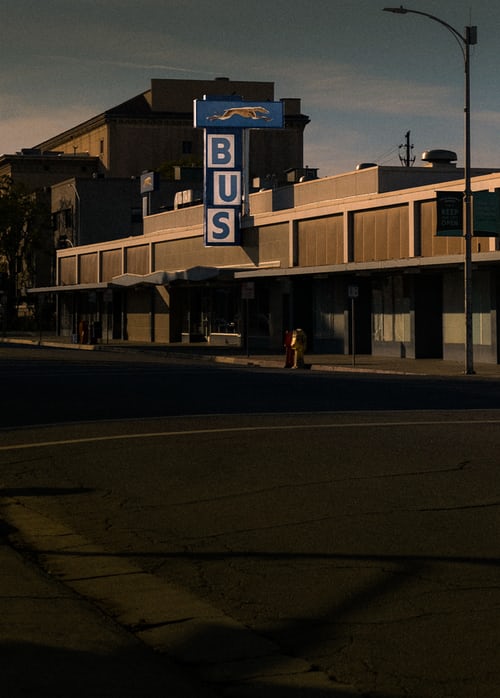 On the last day of school Sandra Conner and Bridgett Knutson were in the dark tiny alcove that led down to the boiler room.  They were kissing when two jocks, footballers, heading down to the boiler room for a smoke, discovered them.  Within an hour it was all over the school and someone had even scrawled “Lesbo” large with a black magic marker onto Bridgett’s new tan Ford Ranger, her rancher father’s graduation present.  Sandy skipped graduation ceremonies and supposed that Bridgett had as well, but did not know since Bridgett had not returned to school and would not answer her phone.

Although they had known and liked one another all during their last semester of high school, she and Bridgett had only just realized a stronger mutual attraction the week before.  Standing in the lunch line, Bridgett had gently brushed against Sandy then smiled in that way.  The two had spent the last week of high school between final exams and senior assemblies, apprehensive, cautiously probing one another for those cloaked signs of affection.  At the graduation practice, Bridgett had slipped a note into Sandy’s hand.  “I want to kiss you.”  Sandy’s heart raced as she whispered in Bridgett’s ear to meet at the alcove.  Now this.

Sandy and her mother had moved back to Rapid City from Pierre at Christmas time.  Mae, her mother, had received a letter from the South Dakota State Attorney General’s office notifying her of Sandy’s father’s release date from the State Penitentiary at Sioux Falls.

“Last place that sonofabitch will look for us is Rapid City.  That’s where he got busted and he knows them cops still got it in for his sorry ass.  But let’s play it safe, baby.  If any of your friends ask, tell ’em we’re movin’ back up to Billings.  Billings, Sandy, you got that?  You unnerstand, doncha, baby?”

So she had entered Central High in Rapid City for her last semester of high school.  How many public schools did that make? Nine, ten?  Yankton, Rapid City, Fargo, Billings, Pierre, now back in Rapid City, fuck.  It had always been her dad running from the law, or running from some dealer he’d burned, then she and her mom running from him until at last he’d drawn six years for possession and breaking a cop’s jaw.  Good riddance.

The outing at Central High was the pits, fortunate only in that it was the very end of her senior year.  Real feelings for Bridgett had begun to grow with her yearning for something more, something undefined, a desire of unknown dimension.  She was almost eighteen, a virgin.  Friends talked incessantly of sex, but it wasn’t sex that she wanted, it was love.  It was joy.  It was to quench that thirst for the enlightenment that characters in movies and  novels found.  A relationship, especially this kind.  Was such passionate romance something perceived only through fiction, novels and movies?  Portrayals unlikely to ever descend upon anyone in wind blown, freezing cold, shit hole Rapid City.  Rapid City, home to too many asshole cowboys and drunken Indians, misogynists, racists with medieval views on women, education, and culture.  And the women, hard-scrabble, beaten down by the vicissitudes of machismo, brutal winters, and living in a place where for hundreds of miles high culture was shit kicker bars, bowling alleys and movie houses showing nothing but films with explosions and car chases.  Before Bridgett Knutson, she had firmly resigned to escape the Dakotas ASAP after graduation.  Now she’d even fantasized getting off the train with Bridgett in Chicago or New York.  The hurt from the outing was less from the shame engendered by gossip, than from Bridgett’s retreat. “C’mon, girl, gimme a call.”

Sandy’s memory was, however, fraught with goodbyes and furtive night time skips out of town. Only two good friends had survived this nomadic existence, Billy Pelltier and her Uncle Fen.

Fen, her mother’s younger, smarter brother and a true Bohemian had a genuine love for his only niece and when he was around he doted on her.  Freshly discharged from the Navy, he had come to live for a while with his sister.  Sandy had attached herself to her happy go lucky uncle who had no problem allowing his thirteen year old niece to drive his Volkswagon, smoke cigarettes and say “shit, goddamit, and fuck it.”  Fen believed himself a reincarnated Lakota Sioux shaman.  He fascinated Sandy by recounting his visions through dreams.  He once told her he had dreamt of her.  In his dream, Sandy was searching for her people but beset by enemies. Wounded, she is saved by a sleek grey wolf which she rode like a pony to a beautiful safe valley to the lodges of her people.  Fen could always make her feel good.

A crippled boy her age, Billy Pelltier and she had become close friends in Pierre.  An outsider like Sandy, the two had met in ninth grade when Mae had rented their trailer from Billy’s grandmother who lived next door.  No father had ever claimed Billy, whose mother had fled to earn her fortune on her back up north in the oil fields, leaving the boy with his grandmother supported by social security and meager rental from three shabby trailers on the sad side of town.  Because she could beat him arm wrestling when they were fourteen, he’d called her Grip.

As soon as the queer gossip hit Mae’s ears she pitched a fit.  “Goddammit Sandy, what in the hell’s the matter with you, girl?  Ain’t boys good enough for ya?  Huh?  You gotta munch carpet?  Is that it?  Where in God’s name did that come from, I wanna know.  Your people may not be perfect by a long shot but we ain’t never had no queers nor dykes neither.  Never.  Jesus H. Christ, girl, where you think you are?  Sandy, this ain’t San Francisco or Paris, France.  No, no, no, this here’s the hard side of Brokeback Mountain.  You best straighten up and fly right, girl.”

She said nothing, but went into a brooding silence.  She tried calling Bridgett once again.  She was tearing up later when she dialed Billy’s number.

“Billy, I gotta get outta this shit hole.  Would you please ask your grandma if I can stay with you for a while?”

“Hey wassamatter, Grip?  You in trouble or somethin’?”

“Just go ask her right now, Billy.  Lemme explain when I get there.”

“Hold on a minute, Grip.  Yeah, Grandma said, ‘Why sure, honey.  Get your ass down here outta whatever storm yer in, Grip.”

“Okay, there’s a  mornin’ Greyhound to Sioux Falls and Vermillion.  I’ll get off at Vermillion and hitch a ride to Yankton.”

“Fuck that, Grip.  Find out what time the bus gets to Vermillion and Grandma and me will be waiting.”

Billy’s place would be temporary sanctuary only.  She resolved to find the life she was supposed to live far from the prairie.  From her top dresser drawer, she took out the sock that held $85.50, some of it babysitting money, some of it the $50 Uncle Fen had sent her for her eighteenth birthday.  Fen was earning big money now down in Nebraska living in his camper, repairing combines all over the state; he’d lend her money.  If he couldn’t?  Well, somehow she would find work, probably waiting tables in Sioux Falls and when she had enough, she was heading for New York.  From the kitchen she heard Mae yell at her.

“I’m goin’ to work now.  You best think over what I’m tellin’ you, Sandy.  You don’t straighten up your act you’re askin’ for trouble.  Big trouble, girl, this is Rapid City.  You hear me?”

“Yes ma, I hear you.”  And fuck you too.  I will be so glad to be outta this shit heap.
She dialed Bridgett’s number.  This time she waited for the answering machine.

“Bridgett, I reckon this is goodbye, hon.  I wish…. oh well, best of luck, girl.  I’m leaving Rapid City for good on the early morning Greyhound.  I do wish… fuck it.  Goodbye, girl.”

Next morning with the small valise in hand she quietly closed the front door as her mother snored from her bedroom.  She walked the seven blocks to the Greyhound station, bought a large coffee.  Waiting alone on an outside bench for the bus to announce boarding, she never heard his approach.  A powerful left arm tightened into a choke hold as Randy Larmar, Mr. Knutson’s ranch foreman, cut off her right ear lobe and then sliced off a hank of her hair with a Buck knife.  “You don’t never call Knutson’s number, you hear me, you little slut, never.  Got that?”   A minute later she heard the klaxon on Larmer’s pickup as he sped past shooting her the bird.  Looking down she saw blood and hair all over her lap and the bench.  Once aboard the Greyhound she willed herself not to cry.  “I am strong, damn it.  I am bigger than them,” she thought.  Fen’s dream was true, she was indeed strong, and knew that wherever she’d land, be it Minneapolis, Chicago, or New York, there she would find the lodges of her people.