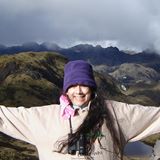 After four decades as a songwriter/performer/recording artist, Crow Johnson Evans has redirected her focus to writing short stories, essays, spinning, and weaving. Her work has been published in Ozarks Mysteries Vol. IV, New Works Review, IndiaNest.com, Whirlwind Journal, Ozarks at Large (National Public Radio KUAF,) Tales from the South, and a short story collection by Mockingbird Lane Press titled “Flights of Fancy.” Educated in Zoology, she is keen on nature and philosophy and their interplay with human life and imagination. Crow and her husband, Arthur, live in Northwest Arkansas, USA. When possible, they eco-tour to support/photograph endangered wilderness and wildlife. A founding board member of the Writers’ Colony at Dairy Hollow, she celebrates that spark of creativity that writers and musicians kindle. Website: crowjohnsonevans.com

After four decades as a songwriter/performer/recording artist, Crow Johnson Evans has redirected her focus to writing short stories, essays, spinning, and weaving. Her work has been published in Ozarks Mysteries Vol. IV, New Works Review, IndiaNest.com, Whirlwind Journal, Ozarks at Large (National Public Radio KUAF,) Tales from the South, and a short story collection by Mockingbird Lane Press titled “Flights of Fancy.” Educated in Zoology, she is keen on nature and philosophy and their interplay with human life and imagination. Crow and her husband, Arthur, live in Northwest Arkansas, USA. When possible, they eco-tour to support/photograph endangered wilderness and wildlife. A founding board member of the Writers’ Colony at Dairy Hollow, she celebrates that spark of creativity that writers and musicians kindle. Website: crowjohnsonevans.com 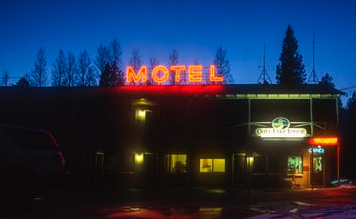 As they drove through the night, Celeste felt the swarm of Margaret’s words crawling into her ears like bees dusty with pollen returning to the hive. Why had she ever agreed to carpool from Lubbock to Chicago? The conference, of course, was the answer: the 25th Annual Folk-a-thon Conference. Jason and Carol were dozing in the back seat, wrapped around mandolin and guitar cases, immune or oblivious to the maddening buzz droning on.

For the first hundred miles, she’d found Margaret colorful and energetic, even interesting, an initial impression that quickly eroded. The panic, which set in midway across Oklahoma, turned murderous by midnight. Celeste decided that this must be what she had done to her own first husband, this endless chatter, this running commentary, this mindless annotation. They had driven coast to coast together. How did he ever take it?
“No wonder he left me,” she mumbled out loud.

Margaret found a way to fit the stray comment into her story and kept going, “That’s what I thought. You know…”

Celeste made peace with the harsh insight. Okay, karma has lured me into this decrepit Oldsmobile with an honest-to-gawd human motormouth. The old goes-around-comes-around prankster must be snickering and rolling on the ground. It’s a bad joke to be this miserable, when going somewhere extremely desirable.

“Can you believe what that dentist did to me? I couldn’t sing, had to cancel three gigs. I was in agony. My lawyer knocking on her door put a hitch in her get-along…” Margaret’s volume had increased dramatically for this tirade.

Celeste couldn’t ignore this one. “Look, I worked for a dentist. Did it ever occur to you that waiting until you had four abscesses might have been your fault, not his?”

“Aren’t you listening? It was a woman dentist and boy was she proud of herself. I wrote ‘Bad Mouth Blues’ just for her. It actually charted in the Midwest. Dah, Dah, dum, da…” She broke into singing the instrumental introduction from the recording.

As Margaret drove and talked, her rant interspersed with singing continued to drive Celeste closer to either tears or a screaming fit – she couldn’t decide which.

Celeste asked for her mandolin from the tangle of stuff in the back. As she rode shotgun and changed strings on her mandolin, she fondled the thinnest string thinking how easy it would be to wrap it around Margaret’s neck. One quick tug, that’s all it would take. She imagined the flash of understanding in her victim’s eyes, just before it was too late. If she killed her at a gas station, they could drive away. Well, maybe not. It was Margaret’s car and they were splitting the gas four ways. To meet her casually, one would think Margaret was an intelligent and friendly person. In close quarters, she was monstrous. Three barking and vomiting, ill-trained Dobermans would be better traveling company.

“I have to get in the back and try to sleep.” Celeste reached back giving Carol’s knee a shake. “Your turn up front.”

On the highway shoulder they swapped seats while the car was rocked repeatedly by hot gusts from noisy passing semis.  As the Oldsmobile and the monologue continued, Celeste curled into the crowded back seat and put her fingers in her ears.  She started to drift off still tormented by the image of bees trying to crawl inside her head.

Just relax. Let go of it, she chided herself.  One long soulful sigh and she felt her body sink into the seat, then through the springs to the floor of the car. What just happened? It was startling and amazing to pass effortlessly through matter. This isn’t like having your legs jump when you think you’re falling. The noise of the road surface gradually became louder than Margaret’s voice.

Another sigh and Celeste was under the car feeling the wind whipping her hair. The spray from wet pavement stung her face. Uneasy but relieved to be out of earshot, she gave a laugh at the bizarre experience. A third sigh and she floated onto the road, through the asphalt and down through cement and gravel into moist, sweet dirt. Her descent wasn’t in stages now; it was a continuous, slow turning and floating drift. The road smells of exhaust and tar gave way to concrete smells then earth smells and salts. All of her senses were alerted. Cement tasted bitter and sounded self-righteous. The aquifer and water tables sang sweetly and felt wholesome.

Is this a descent into Hell? It’s not frightening. Maybe it’s just the Earth, cradling me. I like that idea. If I’m dreaming, why is it so clear? She waved her hand in front of her face. I couldn’t do this in a dream, could I?

Through the crust and mantle, eighteen hundred miles down, she passed a sign announcing: Next Up – the Earth’s Core. Her imagination played a trick removing the apostrophe so that it read “Earth Score”. Fitting for a musician, eh?

She saw a faint light approaching. Oh, I get it. I must have died in that car. What do they say: ‘Go toward the light’.  The glow of the molten center of the Earth’s core was dazzling. The heat was pleasant, not uncomfortable. It was a little like the sticky heat one feels tying up tomato vines in the back garden.

Just before sailing into the center of the glow, Celeste was jerked back into the car. She felt as if an electric winch was slammed into full-speed with an industrial cable wrapped around her waist.

The Oldsmobile was parked in front of a cheap motel, room number twenty-three of the Whistling Pines. Her traveling companions were unloading instrument cases and bags. Margaret leaned in the driver’s side window.

“We’re gonna get some Zs. It’ll cost eleven dollars each. There are only two double beds so we drew straws. You and I are sharing.”

Celeste started to get up and stopped. There was dirt on her sleeves. It looked like potting soil. She laughed and muttered, “I’m so tired I’m imagining things. There’s so much stuff in this car, a flower box wouldn’t surprise me. What next?”

They took turns brushing teeth and getting ready for bed. Celeste was the last. She closed the bathroom door, hung her purse on the hook and put her suitcase on the commode. As she turned on the faucet and water gurgled into a cracked pink basin, she heard music.  With a shudder she recognized the lower water-table song from her dream. She twisted the knob to off; no sound. When she turned the spigot on, there was music again. Off. On. Off. On.

Without hesitation, she went through a series of complicated moves as if she had rehearsed them in her sleep. She slipped back into the room past snoring companions, got her mandolin, took it into the bathroom, and closed the door, careful not to lock it.  The window was narrow but cranked open noiselessly. After a few tries and soft grunts, all of the rusted screen bracket screws yielded. The screen fell silently away. Her suitcase slipped easily through the opening, followed by her purse. Celeste wriggled out the window feet first, by turning sideways and holding the mandolin above her head.

The next morning Margaret yelled from the bathroom: “Holy Sh**! Look at this mess!”

A dozen black and gold bees were going in and out of the open window and the white tile floor was grimy with dirt. Written on the mirror in brown eyeliner was “Gone to swap tunes with Mother Earth. See ya’ll back in Texas. Love, C.”

The three stood with wrinkled foreheads and mouths open, gazing around the bathroom. Before anyone could comment, Margaret picked right up, talking non-stop. “Mother Earth. I heard that band in Austin in the 60s. Tracy Nelson, hmmm hmmm. They were down on South Congress past where the Armadillo used to be. You know the harmonica player was a lanky guy named Powell St. John…”