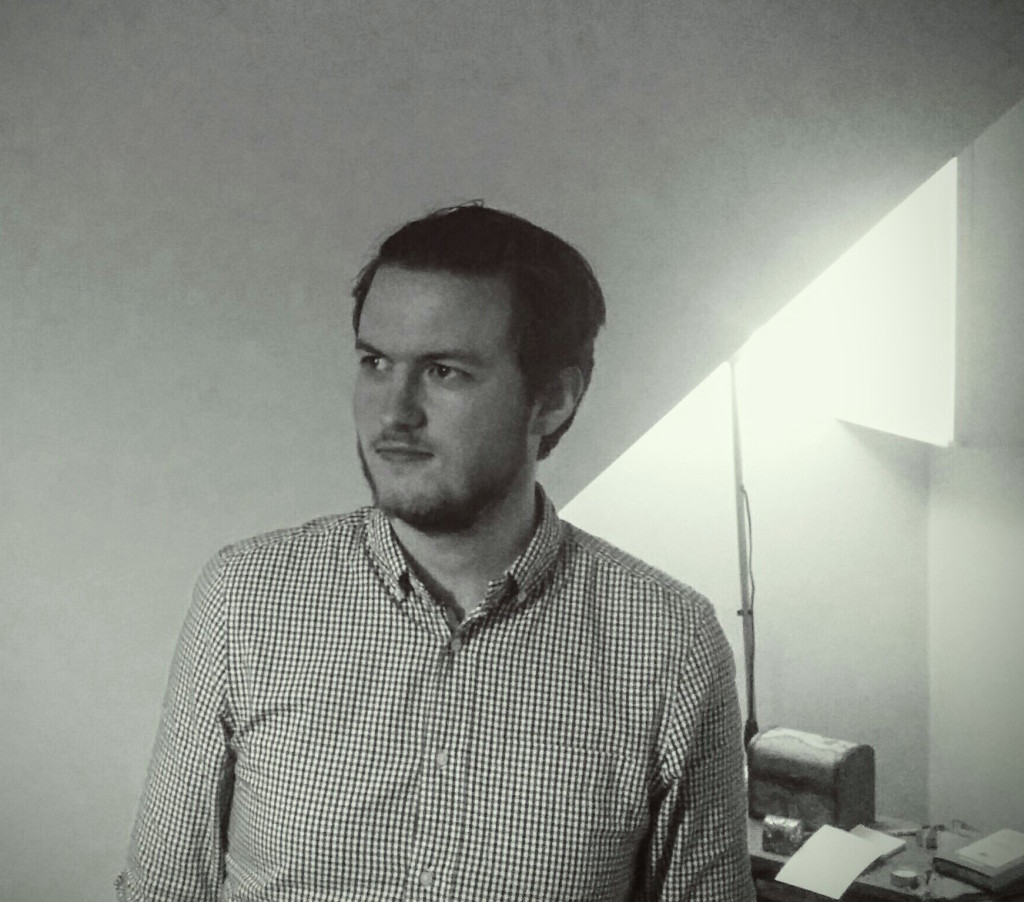 Louis Hunter is currently studying at Falmouth University, where he is reading English with Creative Writing. He is News and Political Editor for the Falmouth Anchor, the university newspaper. Recently he has had his work published on Litro Online, Literally Stories, The Student Wordsmith and now, pennyshorts. He hopes to become a professional writer, squeezing out short stories when he’s not planning his wedding.

Louis Hunter is currently studying at Falmouth University, where he is reading English with Creative Writing. He is News and Political Editor for the Falmouth Anchor, the university newspaper. Recently he has had his work published on Litro Online, Literally Stories, The Student Wordsmith and now, pennyshorts. He hopes to become a professional writer, squeezing out short stories when he’s not planning his wedding. 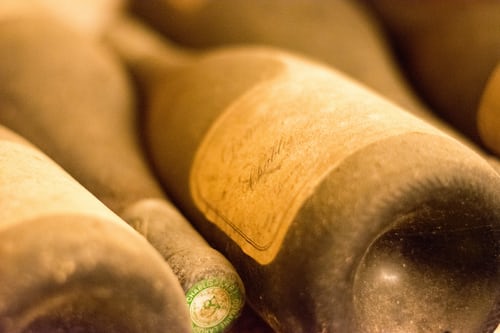 During the summers of my youth, my brother and I, not yet teens, would stay with my uncle Biarno, who lived just south of Bilbao. He owned a small vineyard that looked out onto Lake Urtegia, but had fallen on hard times since the outbreak of the civil war in thirty-six. Not that my uncle noticed. He would spend hours sat on the veranda with us, drinking more of his own wine than he ever sold, while in the orchards workers with skin tanned to leather picked fruitlessly at the vines. Most of the grapes were left to rot, and the smell, molasses mingled with dead flesh, surrounded the villa.

On an evening when the odour of my uncle’s failure was particularly pungent, he called Isabella, his favoured fruit picker, to come and sit with us. Carlos, my brother, and I had resorted to stuffing our handkerchiefs up our noses, in hope of blocking out the stench. Sat on unforgiving wooden chairs, we all watched as the world changed hues around us. Gone were the youthful yellows of dawn, replaced instead by thick ambers, browns and purples that lay heavily upon the world. I placed a worn paperback I had been listlessly flicking through on the decking beside me and hugged my knees up into my chest. Biarno liked to spend his evenings drinking and imparting his wisdom — which, contrary to all evidence, he had no lack of.
‘Gael,’ he would tell me, ‘never marry or have a child. Fuck women, fuck as many as you can, but never settle. All they do is restrict, bore and anger you. A man needs to be free from all that.’ I nodded my head solemnly to show I understood.

A few weeks earlier Carlos and I had been dragged out on another tour through the alleyways of vines that we knew so well by now. Biarno was crouched down, and sifted his hand through the dirt. Occasionally he would take a clump, sniff it, taste it and scatter it back onto the ground with a smile. Carlos and I stood close by, watching him. Around us were the few vines that had been picked of their fruit. The flies buzzed endlessly, feasting on dead grapes, as the heat pounded down upon us.

‘This ground, boys, this ground was made for wine,’ he said as he stood up. ‘My country, our country.’ He looked at us gently, and a pride washed over his face. I stooped to the ground and took a handful of soil, before gazing at the land around us. The dirt was dry, coarse and ridden with small stones.

‘Uncle,’ I said, with arm cast over the vineyard and earth in my hand. ‘I’m not sure the soil here is as great as you say.’ When I turned round, all gentility was gone from his expression and his eyes were set with rage. The skin on his neck burned a deep red and his jaw was clenched shut. He was quiet for a minute, but the flies around us had never been louder.

‘Do you think I cannot run my own business?’

‘I’m sorry, please uncle, I should not have joked.’

‘Oh, so it was a joke? Little Gael likes to make jokes?’

‘In that case,’ he turned to Carlos, who was stood not far from me, ‘why are you not laughing?’ All Carlos could manage was a sob.

‘Leave him uncle, he doesn’t understand,’ I said. Biarno grabbed me, his rough hands encircling my neck, and threw me to the ground. He stooped so his face was touching my brother’s.

‘Laugh!’ The force of my uncle’s shout threw Carlos to the ground in a flood of tears. He turned to me, his leather belt suddenly held taut between his hands. He beat me with it until my left eye was forced shut and I couldn’t feel my fingers anymore. Curled on the floor, the grit filled dirt caked my face. I could hear my brother sobbing hoarsely and, before I could stop myself, I had joined him. My uncle left, satisfied, for another drink.

I was still sat hugging my legs when Isabella came to join us on the veranda. Her heavy brow was adorned by thick, black eyebrows. Deep almond eyes were set either side of a slender nose and her head was adorned with full, dark hair pulled back into a small bun. Her hands looked worn and calloused, and where once her skin had been olive, it had now been burned ochre.

‘Isabella, darling, come sit here.’ Biarno patted his lap. Her face remained emotionless as she did what she was told. Isabella glanced furtively at my brother and I.

‘How are the young senors?’

With a laugh, Biarno said, ‘They’re in perfect health. Just got a bit overexcited, didn’t you boys?’ He looked over at us and we nodded in response. ‘But enough about them, why do you always look so sad, my dear?’ A look of empathy sat uncomfortably on his face.

‘I don’t know, senor,’ she said without looking at him. My uncle looked at me and laughed. Carlos was asleep in his chair, mouth agape. I leant over and pulled the handkerchief from his nose.

‘Surely you must know why you are sad?’

‘No, senor.’ I watched the anger I knew all too well begin to simmer under Biarno’s face. I pulled my knees in tighter.

‘Never mind, forget about that,’ he said through his smile. ‘How about a drink?’

‘I don’t drink, senor. Excuse me, I must get back to my son.’ She stood, but before Isabella could leave, my uncle’s hand was gripped around her wrist. She struggled briefly, but she stopped when she realised it was futile.

‘I ask you to come join us, Isabella, to sit with me and my family,’ he waved a hand at Carlos and I, ‘and this is how you treat my hospitality?’

‘What is wrong with your son?’

‘He has the fever. Pardon me, senor, but I must go.’ She tugged her hand free of his grip and had almost made it to the steps of the veranda before Biarno’s voice stopped her.

‘Maybe I can help your son.’

‘I know a doctor in Bilbao, a good friend of mine,’ he had walked over to her, ‘I could ask him to come and look at your son.’

‘Will you ask him?’ Her eyes pleaded desperately. She tried not to flinch as my uncle’s hands fingered her hair.

‘That depends. So far you have been rude towards me and my guests. You would need to make that up.’ He moved his mouth to her ear and whispered something to her that I couldn’t make out. Isabella gave a slight, resigned nod before hanging her head and walking off towards one of the disused barns. Biarno’s grin reached from ear to ear. His cheeks were flushed with wine, and a kind of happiness shone from his wide and wild eyes . Beside me, Carlos began to stir.

‘Gael,’ my uncle turned to me, ‘stay here and look after your brother. I’ll be back soon.’

I sat and watched him stagger along the same path that Isabella had taken. Carlos was stretching out a yawn as the sun finally set. The world was doused in blood orange light.

‘Go back to sleep, Carlos,’ I told my brother as I left my chair. ‘I’ll be back in a bit.’ I looked back once I had gotten almost to the old barn and saw my brother curled back up on his chair. Before me stood a shed that had once been used to store cases of wine. Now they were left empty; a painful reminder of better days. As I drew closer, the quiet was broken by voices. It was my uncle and Isabella, but they weren’t talking any more. The walls of the barn were pieced together from wooden planks, but many had rotted and fallen away. I peered through such a gap, careful not to make a sound. The room smelled like sweet, damp rot and sweat, and was lit by a single light, a bulb that swung faintly overhead. Lined around the walls were empty barrels standing like monuments to my uncle’s failure. The sound, like muttering voices, somewhere between words and sobbing, surrounded my uncle and Isabella. Both were knelt, Biarno had buried his face into her olive neck. His chest heaved raggedly in time with the bursts of hoarse weeping that escaped him. Isabella caressed his neck and wept herself.

In the dim, old shed, they stayed and held each other. I returned to the veranda and found Carlos where I had left him, sound asleep.

The next morning the doctor from Bilbao came.