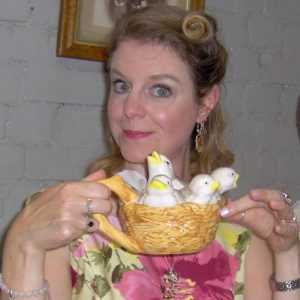 Amanda Staples lives in Bristol and is a short story writer, playwright and aspiring novelist who enjoys moderate success which she is humble about. In her other hat (not the one that makes her look like Miss Marple) she is a Clinical Hypnotherapist and uses her fascination of the mind to inspire her work. She has a minor obsession with death and tea. When she isn't obsessing or writing, she can be found indulging her anthropomorphised dogs.

Amanda Staples lives in Bristol and is a short story writer, playwright and aspiring novelist who enjoys moderate success which she is humble about. In her other hat (not the one that makes her look like Miss Marple) she is a Clinical Hypnotherapist and uses her fascination of the mind to inspire her work. She has a minor obsession with death and tea. When she isn't obsessing or writing, she can be found indulging her anthropomorphised dogs. 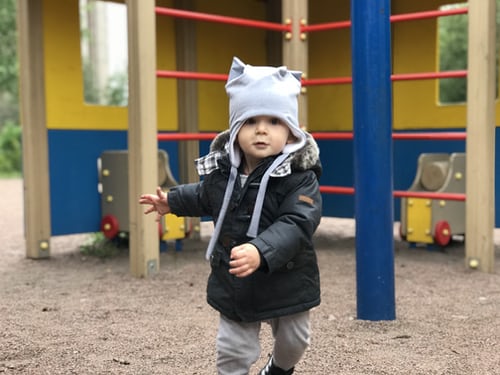 I used to play a game called Yellow Car with my brother. He was prone to travel sickness and mum would distract us with games such as I-spy and Yellow Car and making words from letters on number plates. There are far more yellow cars these days than there were back then, they’re ten-a-penny now. I don’t know if you’ve played it but when you spot a yellow car you punch the person you’re playing with. Or, at least, that’s what happened with us. He would bruise me with his punches, Derek, on purpose. I tried to give as good as I got but he always managed to punch harder until I couldn’t take it anymore and, despite my best efforts, cried. Mum would reach behind her seat and smack us both on the legs as hard as she could manage from her twisted, constricted position. Then she’d turn back and moan to my father, usually saying she wished she’d never bothered to have kids or had at least stopped at one. That would have been Derek. So, I wouldn’t have been born. I don’t think she meant us to overhear her, believing her words drowned out by our squabbling and the radio. But I grew up believing she never wanted me. I wish I’d been brave enough to ask if that were true but I was afraid of the answer.

I never expected to grow up to become one of these women who are desperate for a baby. My mother was hardly a maternal example. I had no inkling at all, then wham! It just happened, as the saying goes. One day, I caught myself watching a nursery on a day trip to the park. All the little children like ducklings following a duck. Their hi-vis tabards swamping them and reaching their knees, hanging wonkily off their shoulders. It was Autumn. They were collecting twigs and leaves and conkers, no doubt for some craft activity. I watched them for a while, their faces full of wonder, their little fists full of treasures. And I daydreamed about how my child would be at that age. Three weeks later, I found out I couldn’t have children after undergoing various rigorous investigations. My husband would not entertain the idea of adoption; couldn’t love another person’s rejected child that would doubtless have ‘issues’. I was still trying to get my head around the idea of IVF when he left me. I haven’t spoken to my mother about any of this. We don’t talk about personal issues in our family. We just don’t.

My brother never married and died young of a heart attack. Well, actually he was on a treadmill and had a heart attack, collapsed, fell off the treadmill and hit his head. That’s what killed him, apparently, the head injury. I don’t know how they tell these things. I don’t want to know. He was thirty-five years old. So, I have no nieces or nephews to spoil in place of a child of my own. My mother has never got over it. She’ll never have grandchildren now. She’ll never forgive me. She looks at me as though all her hope died with him. Maybe it’s true that she never wanted me, but she certainly wanted him, or at least she does now. I am single and childless. We were never close. I am a poor consolation prize.

According to a counsellor I saw briefly, grief can account for unusual actions; uncharacteristic behaviour. It doesn’t make it right if you misbehave, but you can at least say you weren’t ‘in your right mind’. Grief can make you mad. Literally. Grief is a plausible excuse. I wasn’t close with my brother but his death was a dreadful shock, because events like that make you examine your own mortality. Not that I am old. I am three years younger than him. Though now he will cease to age and I am thirty-seven. He died five years ago and I recall his death every week, whereas my mother consistently lives it every day. I guess you never get over losing a child. It drove her and my father apart. I believe this is quite common, at least, the counsellor told me so. My mother and I have both been abandoned due to childlessness in one way or another. You’d think people would cling to each other at these moments, that they’d become each other’s life rafts. Perhaps she wanted to drown and dad wouldn’t let her. Some people don’t appreciate being saved. Especially when they feel they don’t have much to live for.

So, all of this has brought me to where I am today. Sitting in a police station. It comes as a pleasant surprise to find the police are very good with these issues. Very understanding. Even though my brother’s death isn’t recent, the grief card can be played to good effect. The WPC is very understanding, if a little condescending, using the sort of voice I imagine she’d use with a lost or frightened child. We’re in one of the interview rooms and she brings in hot sweet tea. I hate sugar in tea but I drink it anyway because it’s shocking to find myself here.

It’s so easily done. Taking a child. I mean, people really should be more careful. They sit with their phones, texting or chatting. Or they get distracted with the dog they are trying to walk at the same time, or another child, or another mother. Just something. One moment. That’s all it takes. One moment. It can change everything. Turn your world upside down.

The gate on the children’s play area in our park has never shut properly. The hinges are wrong – wonky – so it bounces back open. No-one is bothered. I was sat on a bench watching a child on the slide. I wasn’t spying or anything sinister. I’d been reading, and I looked up, enjoying the autumnal sun on my face when something about him caught my attention – his innocent, giggling joy in a simple act, perhaps? – and I began to watch him. He would climb the few steps on the ladder and slide down, laughing, and then do it again. His mother had tied their Weimaraner to the railings outside; dogs aren’t allowed in the children’s play area. Didn’t seem fair to me, tying it up. Not much fun for the dog. But then maybe she doesn’t have time to walk it separately. Another dog began to bounce around, wanting to play. Her dog was clearly bothered by it and frustrated at being tied up. It got itself tangled and was making an awful noise. The other dog’s owner was obliviously texting on his phone. I was tempted to intervene but feared being bitten. I am not a dog person. And it was not my concern. The woman hopped over the railing and began remonstrating with the texting man, whilst attempting to calm her own dog. And then the boy stopped sliding and just walked out of the play area. I thought he would go to his mother but he didn’t. I continued to watch him. I put my book down and sidled along the bench, moving a little closer to him. Then he broke into a run and headed for the gates. It never occurred to me until then that they had sited the play area perilously close to those gates; to the road. Why had no-one noticed this on the blueprint? His mother was still struggling with the dog. I should have alerted her, but I didn’t. I ran after the boy as he reached the gates and scooped him up. And then it hit me again. Wham! A maternal instinct or something. I don’t know. A warmth; a yearning in my heart. I wanted to protect this child. I suddenly and desperately wanted a child to mother. That’s why I understand why she did it. But to be arrested? Humiliating.

‘Is that Mrs Hyde?’ a voice I didn’t recognise asked as I answered my ringing phone.

‘We have your mother. She’s been arrested for attempting to abduct a child.’

So, here I am. In interview room two with her and that nice WPC, with the condescending voice and, now I notice, a condescending smile, and I don’t know which of us is more shocked at her behaviour. Me or my mother. The WPC isn’t shocked, this is not her first experience of this. We are waiting to see if the mother of the child will press charges. She has apparently calmed down, so the WPC says.

‘He looked so much like Derek as a baby.’

My mother says this as though this relieves her of her crime. But it doesn’t. I cannot condone her behaviour. These are the only words she has uttered so far, her voice small and distant. She doesn’t look at me.

The child’s mother has been told of my mother’s grief. How she is struggling with the loss of her own child, albeit he was not a child. We are waiting to see if, as a mother herself, the other woman can empathise.

I think about how grateful the mother in the park was when I returned her child. How she cried and pulled him to her and he wriggled away, wanting to play, not understanding the upset he had caused.

And I look at my mother and see, she has not understood the upset she has caused.

I cannot understand how as a mother who has lost a child, she can cause that pain to another mother. But then I remember. Grief makes us mad. In that moment she wasn’t thinking straight. In that moment that other mother wasn’t paying attention.

She is still and silent and staring ahead, my mother. She appears dazed. She has not acknowledged me. Feeling I ought to do something comforting or reassuring, I reach over and take her hand. It’s cold. Initially, there is no reaction from her and I nearly let go. Then, as though she is responding to the warmth of my hand, like a salamander sensing heat, she curls her fingers around mine and in that moment, I understand.