Knit One, Purl One, Slip One, Curse One 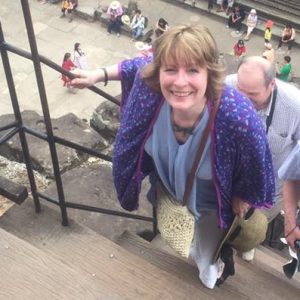 Gaynor Hill is a former learning and development professional who renounced City life to become a country wife, artist and writer. She takes her inspiration from life in the Garden of England where she lives with her husband and aged cat. Gaynor's foray into fiction was prompted by the Women's Institute who introduced her to creative writing. She is now encouraged, supported and, occasionally mocked, by her literary friends and local writing group.

Gaynor Hill is a former learning and development professional who renounced City life to become a country wife, artist and writer. She takes her inspiration from life in the Garden of England where she lives with her husband and aged cat. Gaynor's foray into fiction was prompted by the Women's Institute who introduced her to creative writing. She is now encouraged, supported and, occasionally mocked, by her literary friends and local writing group. 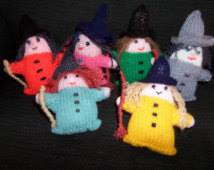 There is rest and revival in the company of woman working together on a shared task. Although we all joined Knitting Club for different reasons.

Liz, our leader and mentor is a devotee and passionate about spreading the word. She dresses from head to toe in multi-coloured yarn and is a big fan of layers as this allows her to wear several of her creations at the same time. Even Liz’s earrings are knitted – tiny, perfect hearts crafted in stocking stitch.

We meet at the home of our village society hostess, Tracey. Tracey acquired a huge bag of wool and needles when her sister was having a sort out. Not one to miss an opportunity, she used this as an excuse to set up our fortnightly gatherings and provides exquisite snacks and glasses of champagne to encourage our attendance. Tracey is also a big fan of layers although this is more to disguise the occasional over-indulgence in canapés than a love of the craft.
And there’s me of course. An early retired professional exploring all the crafts, previously denied to me by a demanding career, and now available through the prudent investment of my city salary and the indulgence of my husband. I am not a fan of layers, having yet to shed the sharp tailoring and kitten heels of my former life.

Monica has layers. A community nurse and grower of medicinal herbs. A quiet voice and writer of passionate and enchanting poetry. A reluctant cook and creator of remarkably restorative soups. Monica has as many layers as an onion. Knitting Club is a way for her to make some new friends. Her olds ones didn’t turn out to be… very friendly.

When Monica first arrived in Little Hopden she was taken up by ‘The Coven’. A group of particularly disagreeable school mums who spent their mornings gossiping at the gate long after their charges were sitting at desks and navigating the intricacies of phonetics. Monica, being new to the area and a little lonely, was pleased to be invited to join them for dog walking after drop off, despite their unfavourable reputation.

For some months, Monica and her energetic Border Collie, Fiona, joined The Coven on their school day hikes. All went well until one day Fiona, a dog of usually friendly disposition, picked up a bothersome Jack Russell by the scruff of the neck and deposited him, none too gently, in a nearby stagnant pond. Buster had thrashed around frantically and disappeared under the surface twice before two members of The Coven waded in and dragged him, whining and shivering, out onto the bank. By the time the drama was over all three were soaking, outraged and stinking. Never mind that Buster was the most irksome dog in the County, spending his walks snapping and snarling and constantly harassing the other dogs. Fiona was obviously a vicious, dangerous mongrel whose threatening behaviour Monica was entirely responsible for.

A campaign followed. Monica would turn up for dog walking at the pre-arranged time and place only to find The Coven had left early or changed their plans at the last minute. Comments and memes about dangerous dogs were shared on social media, mentioning no names of course. Monica’s birthday was studiously ignored.

There were many evenings when Monica arrived at Knitting Club with trembling lip and tearful eye, hurt and bewildered at these petty injuries and injustices. On these occasions, we consoled and comforted and did what we could to cheer our fragile friend.

Monica was late for the next meeting but this wasn’t unusual. She often mislaid things and had probably only just discovered her car keys in the teapot or somewhere equally unlikely. Just as Tracey was composing a ‘Where are you?’ text, Monica burst through the front door.

No trembling lip and tearful eye this time. Monica filled the door frame with fury. Her eyes sparked like black flint and her long hair blazed around her ashen face like shadow flame. It wouldn’t have surprised me if thunder and lightning had accompanied her entrance. We all rushed toward her.

“Whatever has happened, dear?” Liz said, throwing her arms around Monica and showering her with fugitive strands of mohair.

Tracey glided toward the kitchen, “I’ll get you a drink, darling.”

“Come in, sit down and give yourself a minute,” I said, ever practical.

Tracey returned with a lead crystal champagne flute generously filled with one of Kent’s finest rosés.

Monica took a sip, and a breath. “They’ve gone too far this time,” she said. “Target me if you must but leave my children out of it.”

Monica explained how The Coven had arranged a birthday party for one of their little princesses. All the girls in the class had been invited, every single one. Every single one except Emily, Monica’s beautiful, clever, sensitive daughter. Emily was devastated and had been sobbing into a plush, pink unicorn ever since she got home from school.

This was definitely crossing a line. There was an unspoken code of conduct amongst the school mums. Whatever differences there were between the adults, they didn’t let these affect the children.

Appalled and aghast, we ranted and raged, bristled and bridled, steamed and seethed. Tracey’s dining room became quite heated, and she had to turn the thermostat down.

Energy crackled and flared between us…

Down in the village, in their chalk painted kitchens and linen clad living rooms, the Coven were developing a mysterious rash. Ugly, raised welts were quietly surfacing and covering them from head to toe. The next day, stinging and scratching, they would go to the doctor who would diagnose hives and prescribe a liberal application of calamine lotion. Later, as they moped, subdued and sore at the school gate, others would say they looked like they had been pricked all over with needles.

The rash would linger for four weeks and by the time it disappeared, they would entirely forget about Monica. They would never cause her a moment’s angst again.

It seems she just needed to find the right Coven.

Gaynor Hill asserts the moral right to be identified as the author of this work.